Hi! My name is Emma and I’m an Economics major at UMD. Outside of class, I like watching movies with great costume design and reading articles about feminism on the Internet. You can find me on twitter @eyeagz.

I like that this tweet expresses the frustration that sometimes comes with being a feminist and that it comes from the amazing Tina Belcher.

I’m looking forward to learning about MITH’s archive of #Ferguson. I think it will be interesting to learn about an academic perspective on social movements going on right now.

Hello to anyone reading! My name is Amina, and I’m currently a freshman at University of Maryland College Park. I am studying Neurobiology and Physiology as a pre-dental student. Once I complete my undergraduate and graduate degrees, I hope to start my career as a dentist and eventually develop my own clinic. Other than career goals, I enjoy fashion, makeup, and art. You can find me on twitter at Amina8mazhar. 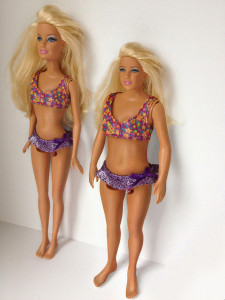 The Barbie on the left looks like the typical toy that most girls or boys play with as children. The Barbie on the right is a newly developed version that represents what ‘real’ women look like, compared to the common Barbie.

This picture is from an article in the Huffington Post. It presents an issue that most people argue about regarding the unattainable standards that society places on women’s bodies. The Barbie on the left is tall and thin compared to the Barbie on the right. However, the Barbie on the right is what a typical woman’s body looks like. The argument amongst this issue is that society targets women to look a specific way rather than embracing different body types. If a girl is playing with the Barbie on the left, the shape and image of that Barbie will be engrained in her mind. Most girls and women these days have negative body images due to these standards that are placed in their minds of what they should look like.

I am looking forward to the Digital Activism Unit. I find it interesting how much the internet can impact various issues going on in the world. A simple hashtag can spread the word about a specific topic, which can lead to mainly positive but sometimes negative impacts.

Hi! My name is Muftiat. I am a computer science major pursuing a math minor and a biology (particularly neuroscience) concentration. I very much enjoy movies across all genres. I look forward to the Golden Globes and Academy Awards every year. In addition, I love music. I am pretty open to listen to anything. Besides that, I have strong interest in the brain and neuroscience, especially mental illnesses. I hope to be able to use computer science to further progress the field of neuroscience. You can also find me on Twitter @MuftiatO. 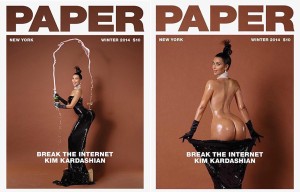 This image above is the winter 2014 magazine cover for Paper Magazine. They did a mostly nude spread of Kim Kardashian in an effort to “break the internet.” After Kim Kardashian posted the pictures herself on her Instagram, I remember people attacking her for doing so such a provocative spread on all forms of social media. However, no one questioned the fact that a magazine company wanted to use naked and semi-naked photos of her in order to increase their worth and their brand. Also, many people, women especially, were quick to judge her on her decision especially since she is now a wife and mother, but when men pose for Calvin Klein underwear ads or even naked, there is much more of a positive response. This photo and the response it received demonstrates one of the double standards that exist between men and women.

I am most looking forward to the digital activism portion of this course. In one of my high school English classes, we explored whether a difference can really be made through social media, and it is something I constantly wonder about and battle back and forth with myself. On one hand, you are tweeting or posting and through that people are becoming aware of the what is going on, but on the other hand, beyond your phone or computer, what difference is being made?

Hello! My name is Chris and I am majoring in Electrical Engineering. You can find me on twitter @ChrisFromDCC106. I do very little other than play guitar and write songs and do homework.

I liked this picture because it really shows the differences society views men and women.

As far as parts of the course go, I’m very interested in all of the topics because I don’t spend a whole of time thinking about these topics.

We will use these visuals to structure our class today:

This graphic exploration of the idea of “colorblindness” connects to our topic for today.

Everyone, make sure you go to the right room! We’ll be meeting here until our regular classroom, 0135 Taliaferro, is ready.

Due Friday January 30 at 5pm. If you are a new member joining the class during the add/drop period, your introductory blog will be due by the end of the week in which you join us.

1. A paragraph introducing yourself to the class and to anyone who might be reading. Include the Twitter ID you will be using – but you do NOT need to include your full name.

2. Find an image, video, or link that tells us something about race, gender, and/or labor on the internet. Make sure to embed the image or video in your post, and to link back to where you found it (with a HTML link coded correctly, not just a pasted URL).
Briefly answer the questions: where does this come from? What does it mean?

3. Tell us which part of the course you are most looking forward to.

I’m looking forward to meeting everyone on Wednesday!

As soon as possible and before the end of the first week of classes, please fill out the form below. All responses are confidential; only I (Dr Lothian) have access, and I won’t be sharing your answers with anyone.